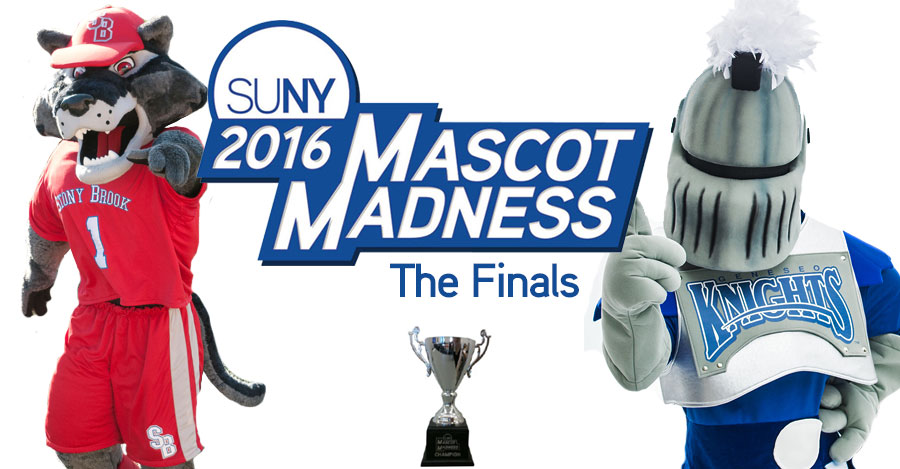 This is it. We have reached the Finals in our 2016 Mascot Madness tournament. This is the last chance for YOU, the students, alumni, and fans to decide who SUNY’s favorite campus mascot is! Will it be Victor E. Knight from SUNY Geneseo, or Wolfie Seawolf from Stony Brook University?

We started with a total of 39 mascots from across New York State in the running to win the coveted title, including some first time participants. All mascots were randomly placed into 4 SUNY regions and ranked by the number of athletic teams each mascot represents, which determined which mascots were competing against each other in each round. We now enter into the Finals, or the battle for the championship.

Our two remaining mascots have competed hard for the right to be named New York’s favorite mascot. Rounds one and two combined for 19,000 votes. In Round 3, we saw more than 16,000 votes cast for the remaining competitors, and another 16,000 votes in the Final Four. Now who will be crowned the winner? You decide. 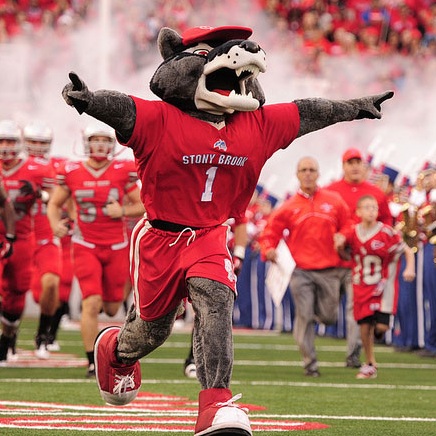 1) Who are you and what do you do?
Well I am the one and only Wolfie! I represent the pride and spirit of Stony Brook University by personifying the relationship between the student body, faculty and staff, athletic teams, and the Stony Brook fan base community!

2) Where did you work before you were hired as a mascot?
Before I was hired, I worked at a restaurant as a server, but my fur kept getting into the food and my tail would hit customers in the restaurant so I was fired… President Stanley was kind enough to offer me a position and I have been here, happily, ever since!

4) Which mascot would be your SUNY sidekick?
I think Baxter and I would get a long really well as partners! We know each other personally and always seem to get a long whenever we see each other. I plan on seeing him when our men and women’s basketball teams play Bing’s in the playoffs!

5) What is your favorite part of New York State?
Well Stony Brook University of course! But specifically… probably Island Federal Credit Union Arena on game day. The energy and atmosphere on game day is electric!

6) Have you ever studied abroad?
I have never been abroad, but I hope to be able to spread the spirit of SBU somewhere overseas if given the opportunity!

7) What TV show could you watch all day?
“Behind the Mask”, hands down. It’s a show about mascots and what we do and what are lives are like on a daily basis. By watching the show you will be able to see into the lives of a mascot and see exactly what we do and how our passion drives us every day.

8) What is your favorite fast food spot?
The food truck during lunch time on weekdays outside the student union. Their avocado burger is on another level!

9) What song/music do you listen to in order to get hyped for an event?

10) What is the best class you ever took?
Best class I’ve ever taken…. I’m going to have to go with American History with professor Jared Farmer. He’s a great lecturer and the recitations are engaging and make the material so interesting. 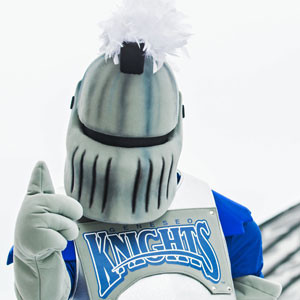 1) Who are you and what do you do?
Victor E. Knight, the SUNY Geneseo Mascot. My main role is to promote Geneseo spirit every Knight.

2) Where did you work before you were hired as a mascot?
I was a knight of the round table. Before that I studied medieval art and literature.

3) What is your most embarrassing mascot moment?
When I tripped and rolled down Cardiac Hill on campus.

4) Which mascot would be your SUNY sidekick?
Lucky the Bronco from SUNY Delhi and Ellsworth Eagle from the College at Brockport.

5) What is your favorite part of New York State?
The mountains, the museums, the lakes, the food, the friends, and of course, Letchworth State Park.

6) Have you ever studied abroad?
Yes, I studied the architecture of castles in Ireland, Scotland, England and the chateaus in France.

7) What TV show could you watch all day?
Game of Thrones – “A mind needs books as a sword needs a whetstone if it is to keep its edge. That’s why I read so much.”

8) What is your favorite fast food spot?
I have several. They are Aunt Cookies Sup Shop, Mama Mia’s Pizza, University Hots Geneseo, 82 Main Street, and Bar-Eat-O in Geneseo, NY.

9) What song/music do you listen to in order to get hyped for an event?
“A Hard Day’s (K)Night” by The Beatles.

10) What is the best class you ever took?
Medieval Studies – Poetry and Cosmology in the Middle Ages.