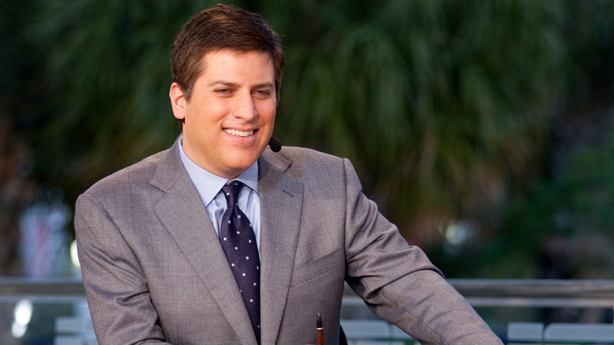 Steve Levy is a businessman, actor, and broadcaster. He graduated from SUNY Oswego in 1987 before beginning his professional career in broadcasting with sports talk radio station WFAN out of New York City. He started his long running career with ESPN in 1993, where he anchors for SportsCenter nearly every evening.

Before migrating to SportsCenter, Levy worked the NHL regular season and playoff games as well as ESPN’s college football. Levy, better known as “Mr. Overtime” in the hockey arena, holds the coveted honor of calling the three longest NHL games in television history, in 1996, 2000, and 2003.

And his talents don’t cease at television. In 2005, Levy appeared in the films Fever Pitch and The Ringer playing himself. Then, in 2007, he appeared in The Game Plan and in 2012, Parental Guidance. Showcasing his business side, Levy partnered with ESPN co-worker and former NHL head coach Barry Melrose in 2004 to co-own the Adirondack Frostbite, a minor league hockey team that was located in Glens Falls, NY.

Levy returns to his alma mater every so often, including to dedicate the state-of-the-art Steve Levy Press Box in SUNY Oswego’s Campus Center Ice Arena and to speak to graduating students on success after college.

1. Your intentions throughout college at SUNY Oswego were clear—you majored in Communications and concentrated in Broadcasting. What attracted you to the field?


I knew I wanted to make my living in pro sports and based on my extremely limited athletic ability, I realized at about the age of 5, broadcasting was the only way for me to go. The decision to try this path was actually quite easy…success was much more difficult…

2. What clubs or activities did you participate in at SUNY Oswego?


I was heavily involved in SUNY Oswego campus media really from the first day I stepped foot on campus—TV, radio, and the newspaper.

3. How did your college education help prepare you for life and your career?


Many classes were very helpful, especially broadcast journalism, public speaking and tv production. But maybe even more important was the practical experience I gained at the college radio, TV stations and newspaper along with the professional radio stations both on and off campus…I was able to makes lots of mistakes with a relatively small audience (most of whom I knew personally) watching, listening and reading.

4. What is a typical day at work like for you?

5. What is your most memorable experience as a broadcaster so far?


My most memorable experience as a broadcaster is an easy choice. Back in 2004 when ESPN took SportsCenter on the road to Kuwait, we tried to bring a little piece of “home” to our men and women in uniform who couldn’t be home. I found a whole new appreciation for what soldiers go through and what it must be like for their families. I’ve always loved my country, but I’ve found myself much more patriotic ever since. The trip was actually one big 6. What advice do you have to share with our current SUNY students?

My advice is to take a chance professionally to do something you enjoy. You are still in school, you are young and have plenty of opportunities to change direction, should your first (or 2nd or 3rd) choice not work out for you. Never turn down an opportunity in your chosen field because you never know what it will lead to or what contacts you will make. The chance that you pass on, because you think its beneath you or not 100% exactly what you want to do, will be taken by someone else and they will prosper and you will be left wondering if you made a mistake that could impact you for years to come.