Welcome to the First Annual GenerationSUNY Mascot Madness – Round 2! This is a competition where YOU can decide who is the BEST SUNY mascot. We are excited to announce that this year’s contest includes 30 SUNY campuses representing 472 athletic teams and over 220,000 students! 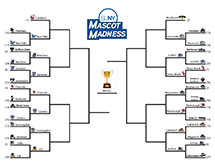 Round 1 brought some exciting matchups! With over 68,000 votes cast, some of the games were real nail-biters. Pete, the Maritime Privateer, beat Benji, the Buffalo State Bengal by only 297 votes in a match-up that was the second most participated in. And over 10,000 votes were cast in the Postdam Bears-Morrisville Mustangs contest. Through all of this, one thing was clear – you love your mascots!

After Round 1, only 14 of the teams can move on. Was yours one of them? We had some “underdogs” move on and we saw some great social media marketing from some of the mascots. What does that all mean? View the round 2 bracket to see who your mascot is facing next.

Round 2 begins today and ends Sunday, March 17 at 11:00pm. The votes will then be counted and the winners will move on to round three – the Quarterfinal round – beginning Tuesday, March 19. Even if your school is out, there’s still a lot of mascots that have great profiles to compare against. Read on to find the mascots you feel deserve to move on. Vote for your favorite mascot in each match up and help us decide who winds up on top!

Last night, we noticed some suspicious voting patterns in the Geneseo vs. Maritime game. After investigating the IP addresses used in all the games, we were able to determine that a malicious application was used to garner additional votes for Geneseo via remote automated script. We were able to correct the problem and have reset Geneseo’s vote count to adjust for the inconsistency.

In the future, if any suspicious voting activity is discovered and can be identified, those votes will be removed, voting will be suspended for the remainder of the week’s matchup, and the campus with the highest number of votes after the adjustment will automatically be advanced to the next round. If the suspicious activity cannot be identified, both teams in the matchup will be disqualified.

We are so excited that the SUNY family is engaged and having this much fun with Mascot Madness in only its first year. Let’s work together to ensure we can maintain a fair and friendly competition!