Seven SUNY campuses’ return on investment (“ROI”) have been named among the top in the nation, according to ranking agency PayScale in its 2013 College Return on Investment (ROI) Report. The seven SUNY institutions, among the top 400 ranked, are some of the two dozen SUNY campuses named in the list. SUNY Maritime College ranks fifth over all, beating out every Ivy League school and both Maritime College and Stony Brook University have projected returns on investment of over a million dollars.

The results are based on an analysis of PayScale‘s 40 million career profiles; the report examines the return on investment at 1060 public and private colleges and universities in the United States and then ranks them in a comparison to investing money in other ways, like interest with a bank.

The seven SUNY campuses that are among the top 400, in reference to in-state tuition, are: 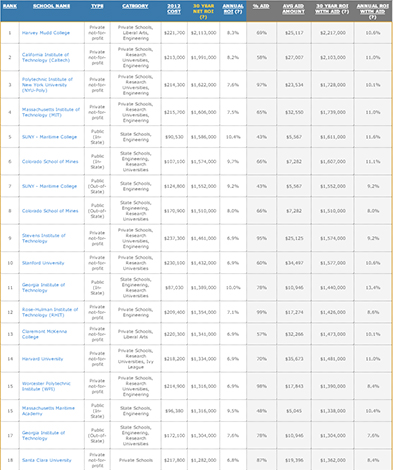 363. SUNYIT
SUNYIT is the only technical college to represent SUNY in the top 400.

Many of these schools also scored on the report for out-of-state tuition, which is consistently recognized as presenting a “Great Value” for non-New York State students. These rankings reinforce the quality of SUNY institutions as a whole and the success of SUNY students. There are currently over 468,000 enrolled students and nearly 3 million alumni.

PayScale points out that this year, the Northeast Census region makes up the majority of the top 30 ROI schools; SUNY contributes with Maritime College being one of those and SUNY as a whole representing over 25 total rankings. In addition, 74 total schools on the list show a ROI of over a million dollars – both Maritime College and Stony Brook University are among that return bracket.

The SUNY schools represented in this list rank higher in ROI than schools such as Yale, Vanderbilt, George Washington University, Michigan State University, Quinnipiac and many more.

Click here to read all of the highlights from PayScale’s 2013 College Return on Investment Report or view all of the ROI rankings.