Welcome to Round 3 in the Second Annual SUNY Mascot Madness! This is a competition where YOU can decide who is New York’s favorite campus mascot! This year’s contest includes a record 44 SUNY campuses representing more than 637 athletic teams and 350,000 students! Round 1 saw 44 mascots compete. In Round 3, the remaining 8 mascots will compete to see who makes it into the final 4 before reaching the finals. 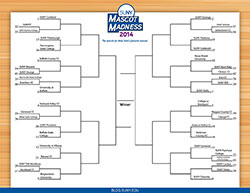 Round 3 of the 2014 SUNY Mascot Madness competition

Round 3 ends Thursday, March 27 at 4:00 p.m. The final totals for Round 1 and 2 can be found on their respective archive pages (1 2). Round 3 will now decide which mascots will be representing the final four competitors!

Remember to click over to read all of the interviews with our mascot participants. Each one of them tells us a bit about their personality, how they came to be a mascot at their campus, and some of their more interesting habits. Then, vote for your favorite personality in each match-up!

03/27/14-4:00pm: Adjustments were made to remove rogue votes from each mascot. Updated totals are in place.

03/26/14-5:00pm: Adjustments were made to remove rogue votes from each mascot. Updated totals are in place.

How voting works To ensure fair competition as best we can and prevent multiple votes, the voting widgets are set to restrict users to one vote per 8 hours from your location.