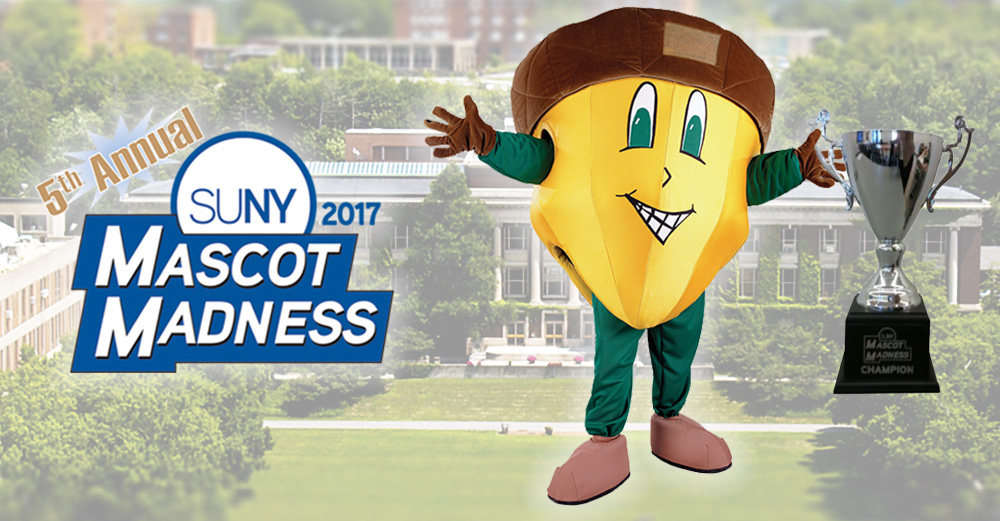 In the 5th annual edition of our Mascot Madness tournament, the competition was indeed fierce. Fans were wondering, would we have another repeat champion, or would a new, unexpected winner be crowned? Well, after a long month of fighting for the title, we have a winner!

Oakie the Acorn from SUNY ESF is officially the new Mascot Madness 2107 champion!

Victor E. Knight from SUNY Geneseo was looking to be the second repeat champion in this tournament. After a good fight between him and Oakie the Acorn, Oakie won the battle and ended up in first place for his first ever title!

This was, without a doubt, one of our most intense Mascot Madness tournaments. 38 mascots competed and drew upwards of 90,000 votes that showed support for people’s favorite mascots. And the final was decided by a difference 0.6% in the vote totals!


We were able to ask Oakie – what do you think took you over the top to become champion? His answer showed the spirit of the event. “It was definitely the enthusiasm of the students. They mobilized early and made sure the Syracuse community and beyond knew about their school and mascot. You should see the smiles on this campus!”

Best of all this year, the sportsmanship we saw was above and beyond. Competition can really bring out the best in people, and we saw that this year. You could call it a renewed spirit of Systemness throughout the month.

When it’s this close everyone’s a winner that goes to SUNY! #MascotMadness @SUNYGeneseo @sunyesf @SUNY

50%/50% No matter what the turnout we are all winners! Great race @ESFOakie. #MascotMadness @SUNY @SUNYGeneseo

After the championship was decided, we asked Oakie how it felt to be named winner of Mascot Madness. He replied that “It feels amazingly wonderful! It’s like taking all my favorite days — the first day students arrive on campus, Commencement and Earth Week — and rolling them into one.”

Mascot Madness has been growing every year, thanks to the students, faculty, staff showing how much they support their school and alma mater. Alumni and communities also join in to participate in the tournament and vote for their respective mascots, pushing SUNY into the spotlight even more. We’ve seen radio and tv spots putting the focus on our mascots and the schools they represent.

Mascots have been a part of athletics and branding for a long time, encouraging students to never give up, allowing players to keep hope and of course show us what makes their institution so great. These mascots have come a long way and have shown their spirits and what it takes to be a great mascot. So before we head off from the tournament, be sure you get to learn more about this year’s mascot competitors and what makes them tick:

We would like to thank all the Mascots who participated in this years competition, from fans to those who managed the competition. You can look though the tournament and see who beat who, and how, in each round:

And finally, our mascots, campuses, and communities had their messaging voices on full volume throughout the competition. All month long mascots were showing their power on social media and posting videos and photos to show the world why they deserve to be the Mascot Madness champ. We saw some awesome social media behavior and advocacy throughout the tournament. You can relive some of these moments in our extensive storify document that brings the talk to you.

Thanks to all who participated throughout our 2017, and 5th annual, Mascot Madness Tournament. It was one for the ages. This competition shows us that we can continue to spread the SUNY spirit all year long. So until next year, congrats Oakie! May you carry that trophy with pride all year long.