And the winner of Mascot Madness 2018 is… 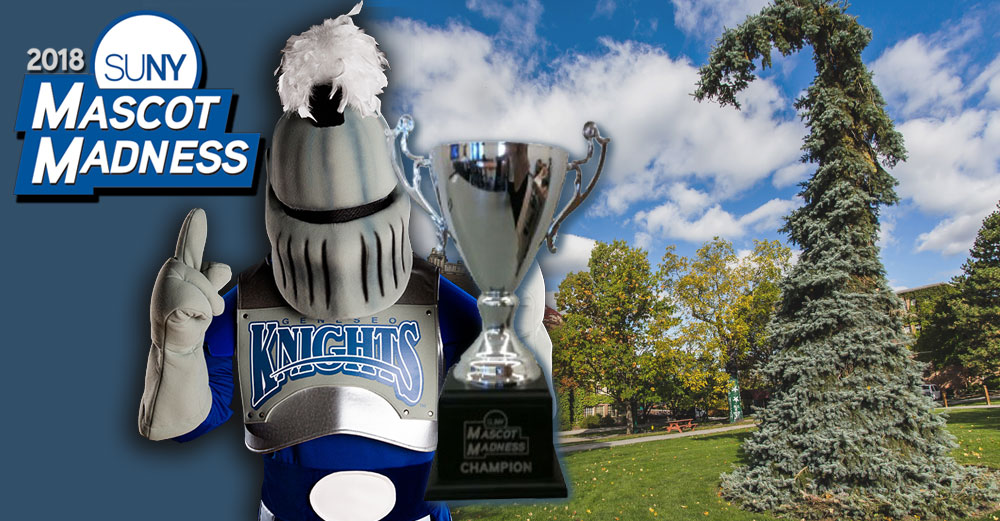 Three weeks, tens of thousands of votes, and some major bracket upsets all bring us to the end of Mascot Madness 2018. This was a wild ride with a 36-team tournament that ultimately ended with some familiarity, as this year’s winner is reclaiming a title he first won in 2016. With well more than 55,000 votes cast throughout the tournament, the winner of Mascot Madness 2018 is none other than Victor E. Knight of SUNY Geneseo! Congrats, Victor!

It was sweet when he let Oakie Acorn win last year, but Victor’s done messing around. Let’s put that crown back where it belongs! Vote here: https://t.co/A9qBuzIwtP #MascotMadness pic.twitter.com/pX0VPEXgvV

Victor is not new to the competition. He’s been a top competitor for some time now, and he trained hard in the offseason to prepare for this year’s tournament. After winning the title in 2016, he was narrowly edged out last year by SUNY ESF’s Oakie Acorn. That loss must have lit a fire in Victor because he came back to the 2018 tournament with something to prove, and he left it all out on the court/field/mascot lounge. He becomes the second two-time winner of SUNY Mascot Madness, joining Binghamton’s Baxter Bearcat.

But in order to do so, Victor needed to beat competition the likes of which he hasn’t had faced in the past. Rip Van Winkle, an upstart mascot from Columbia-Greene Community College in Hudson, NY was making noise of his own. Many fans came together to show support for the fierce underdog throughout the tournament. Rip was set to compete to the end, and that he did, losing in the finals by less than 2% of the total vote.

Asked how he will handle the loss in the finals, Rip told us “….”

Since mascots don’t talk, Jaclyn Stevenson, Director of Public Relations at Columbia-Greene Community College, translates this to mean “What can I say – the students, faculty, and administration really woke me up over the last few weeks. CoGreene may be small, but we are mighty. Whether it’s academics, athletics, or community spirit, we are in it to win it. I’ll see you next year – well rested and ready to rumble.”

We commend Rip for his efforts and we’re excited to see what he brings to the tournament next year.

As for this year’s tournament, we can guess that Victor is pretty proud of his victory – it is part of his name, after all. After being informed he was the 2018 champion, Victor E. Knight was thrilled to share his win with his friends at SUNY Geneseo and the entire college community. Asked to answer how he found a way to win this year, he told us simply “…..”

Director of Student Life Charles Matthews at SUNY Geneseo was able to translate. He said Victor’s words were “It was a hard-won battle! All my fellow SUNY mascots were strong competitors, but Geneseo students, staff, faculty, alumni, and friends came together in the end to put the “E” in Victory. Go Knights!”

Indeed. Congratulations Victor. Be ready to defend that title next year, when everyone will be coming for you once again.

Mascot Madness 2018 ran for five rounds for three weeks in March, and it wouldn’t have been as big of a success without the participation of students, faculty and staff, alumni, and other members of the SUNY family. Each round saw nail-biting competition, immense school spirit, and a lot of heart from all of our participating mascots. If you missed out on any of the action, we put together recaps for each of our five rounds:

If you weren’t following along on social media throughout the tournament, you may have missed keeping up with our mascot competitors and their antics for trying to drum up more support. Some notable activity can be viewed below.

Hi Blaze! It’s me against you … SUNY Mascot Madness … Tuesday-Friday. This is me getting ready for battle. Are you? See you next week! @SUNY #MascotMadness @DelhiBroncos pic.twitter.com/Xk0eutP8l9

We’re in a tight race for @SUNY #MascotMadness. Do you know what Falco likes more than energy drinks? Votes! Round 1 ends at 4 p.m. today, so be sure to vote for Falco in Region 2! https://t.co/pad9so02t2 pic.twitter.com/tNw5M9Oiy4

Even the SUNY New Paltz President is voting for Hugo for #MascotMadness You should too! Follow the link below to vote! #npsocial #NewPaltz https://t.co/Wyh3qtm20z pic.twitter.com/g9SDsI4RWa

Victor’s nana baked some cookies for her grandknight’s Mascot Madness victory party tonight. But wait… WHAT IS THIS?!! VICTOR IS BEHIND!! #MascotMadness https://t.co/A9qBuzIwtP pic.twitter.com/duVXs4IbS3

Ram-bo wants YOU to vote today! FYI you may vote every 12 hours to win the #MascotMadness . Please vote @RamBotheRam1 as the best mascot throughout all NY! https://t.co/js90Mi3EDQ #Rambo #FSC #NYC @SUNY pic.twitter.com/eJ4PHS1hhI

#MascotMadness is here! It’s Stitch’s year to win, so make sure you vote for your favorite cat: https://t.co/ky82abk7Ei [@SUNY] pic.twitter.com/WSaW4148sm