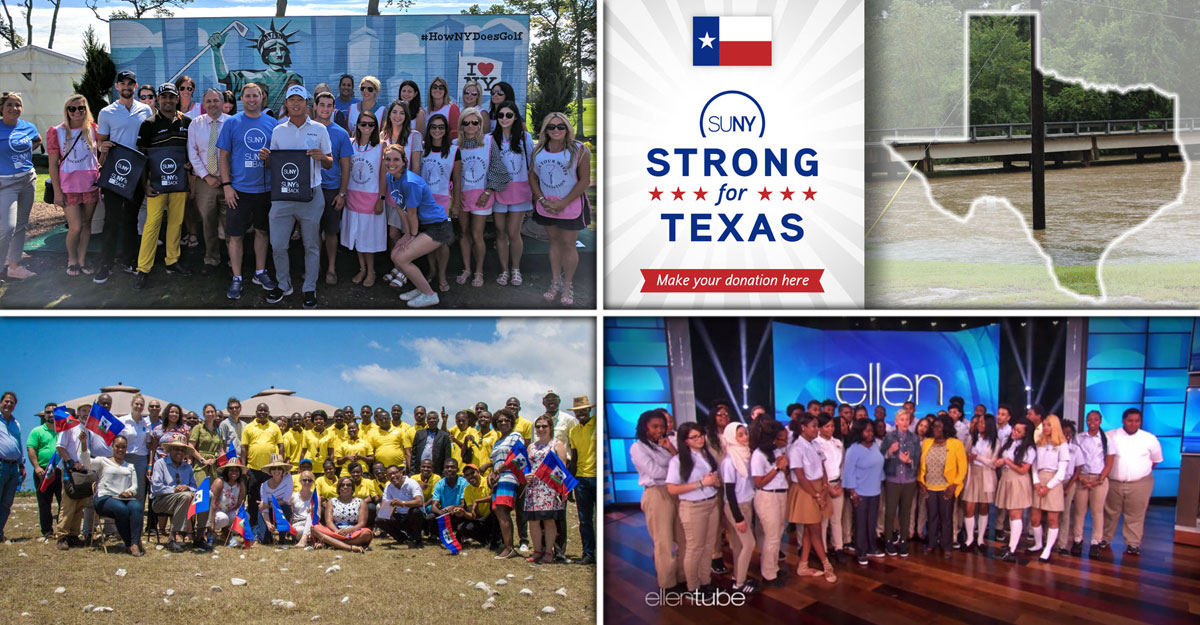 We started yesterday with part one of the best SUNY stories from 2017. Since the first half of 2017 was eventful and full of good news, we split up our year in review posts to make sure you didn’t miss any of the exciting breakthroughs and growth that happened at SUNY throughout the year! Among other efforts, in the buy cheap propecia online second half of 2017 we saw large efforts and growth in our work to end sexual assault on campus, collaborative efforts to aid those affected by hurricanes down south, and new academic and research opportunities in Haiti rise up among multiple campuses.

Here are some of our more noteworthy accomplishments and stories from the second half of 2017: One of the greatest experiences you can have outside of the classroom is an internship. Whether it is paid, unpaid, or for class credit, an internship provides a student with real-world experience. This past July, the country celebrated interns on the first National Intern Day, a day to praise all the hard-working individuals who contribute to the success of organizations while learning and preparing for their own future careers.

As a system, we are dedicated to learning outside of the classroom with our focus on applied learning. Applied learning includes intern opportunities from clinical placements and https://blog.suny.edu/2021/02/professional-cialis/ cooperative education as well as service learning, volunteerism, student research, international opportunities, and field study. At SUNY, there is a profound appreciation for the talent, skill, and contributions we acquire from interns throughout SUNY, and we celebrate our interns every day.

July was also full of celebrating the many SUNY schools named to CNN/Time’s Best Colleges For Your Money and Forbes’ America’s Top Colleges for 2017 lists. This year, SUNY’s partnership with the PGA TOUR was made larger, extending out to include the PGA TOUR Champions. On August 17, SUNY was invited to the Dick’s Sporting Goods Open, a champions tour event near Binghamton, in an effort to fill 5,000 comfort bags for regional sexual assault and domestic violence shelters around the Southern Tier. The following week, on August 23, SUNY set up shop at the Northern Trust Open in Old Westbury for the first stop of the PGA TOUR Playoffs. The goal here was the same – fill 5,000 bags for regional shelters throughout Long Island and Albany.

Both events were a resounding success! Among the two events, we had hundreds of volunteers join us from many campuses, including Binghamton University, Broome Community College, Old Westbury, Farmingdale State, and more. Campus leaders, including Broome president Kevin Drumm, Farmingdale President John Nader, and Old Westbury President Calvin O. Butts III all got involved and helped fill bags themselves.

Other noteworthy stories from August include a professor at University at Albany’s The RNA Institute being awarded the American Heart Association’s prestigious Scientist Development Grant to study new therapies for children with muscular dystrophy; and SUNY paving the way to provide educational opportunities to incarcerated individuals. This past September, Hurricane Harvey tore through Houston and the southeast corner of Texas bringing flooding the likes of which we’ve never seen before. Hundreds of our students come from Texas, so SUNY is connected to the area that experienced devastation, and we help our neighbors however we can.

Our own Maritime College’s training ship, the Empire State VI, headed down to Texas to assist with the recovery efforts. Coinciding with this announcement, Governor Cuomo announced that a SUNY statewide collection drive would be hosted at SUNY Plaza in Albany, as well as online, collecting cash donations to be converted into needed supplies and delivered aboard the Empire State VI. More than $25,000 was raised for supplies that were delivered to impacted areas down south.

As far as rankings go, the annual U.S. News & World Report lists of Best Colleges and Universities in America was released in September, and a number of SUNY schools were featured.

These reports include approximately 50 different types of numerical rankings and categories, and is well known as being a highly reputable resource for students and their families. You can check out the many SUNY schools featured in this year’s list.

Additional memorable moments from September include Chancellor Kristina Johnson‘s first day as the 13th chancellor of The State University of New York; and the Association of College Council Members and College Trustees 47th annual conference, where many SUNY students received scholarships for excellence in academics, service, and education.

Unfortunately, many citizens of Puerto Rico and U.S. Virgin Islands were displaced by Hurricanes Maria and Irma this past October. Some of those happen to be students at SUNY schools throughout New York. To help these students, Governor Cuomo put forth a directive to offer in-state tuition for the current academic year, and SUNY’s Board of Trustees quickly authorized the decision.

A copy of the resolution adopted by the SUNY Board is available online.

October also brought about the good news that SUNY distinguished professor on the faculty of Biomedical Sciences, Joachim Frank won a Nobel Prize for chemistry, along with Jacques Dubochet from the University of Lausanne in Switzerland and Richard Henderson of the MRC Laboratory of Molecular Biology in Cambridge, England. Frank was a senior research scientist and lab chief with the Wadsworth Center, which is affiliated with the University at Albany’s School of Public Health from 1975 to 2008. He was named a SUNY distinguished Professor in 2007.

The prize was awarded to the duo for “developing cryo-electron microscopy for the high-resolution structure determination of biomolecules in solution,” according to the Nobel Prize committee. Cryo-electron microscopy is a method for imaging molecules in three dimensions and, therefore, for enabling scientists to visualize proteins and other biological molecules at the atomic level.

Other newsworthy stories from October include the SUNY System’s efforts to raise awareness during domestic violence awareness month; SUNY’s research contributions to detect and prevent breast cancer; and Chancellor Johnson joining top congressional Democrats and Chancellor Gary May of University of California, Davis on Capitol to vocalize her support of “Dreamers.” In November, an exciting new opportunity that is taking shape in off the waters of the Caribbean Sea was announced. A new and exciting SUNY project is taking place in Akayè, Haiti, thanks to a partnership between 10 SUNY schools and five not-for-profit organizations that together are creating a Sustainable Village & Learning Community (SVLC) in the island nation. In addition to SUNY’s and not-for-profit involvement and support, the W.K. Kellogg Foundation awarded a critical grant to launch the project and has pledged to remain involved in the mission to help Haiti grow.

Together, with critical local partners, SUNY is working to implement a sustainable model of education and social sustainability for Haiti.

In addition to the Haiti project, November gave us a great story to follow from New York City that went national. For many high schoolers residing in Brooklyn, pursuing higher education is unfortunately out of reach; statistics show that only 4% of graduating seniors in Brooklyn attend college after high school. Yet, students from the Summit Academy Charter School are changing this statistic, thanks to their hard work and the generosity of Ellen DeGeneres and WalMart.

Earlier this year, Ellen and Walmart surprised the entire senior class at Summit Academy with life-changing news: they were all receiving four-year college scholarships to a college in NY! With the help of exceptional teachers and Ellen’s scholarship donation, 93% of Summit Academy’s seniors from last year are currently in college, a majority of whom have selected SUNY schools as their college choice.

In November, Ellen launched a six-week docuseries called “Summit” to follow six of Summit Academy’s graduates, who are all attending SUNY schools, on their college journey. You can watch the entire series on your own time. The last month of 2017 was spent featuring our 30 Days of Giving campaign, which highlights some of the charitable work being done by our students, faculty, and staff in every region. For the 30 days following Thanksgiving, we highlight one campus or student that has made real change in their community in 2017 through volunteerism, charity, and other acts of kindness.

We were eager and thankful to share incredible stories of SUNY campuses giving back, and it’s clear that the spirit of generosity is strong at SUNY. For a full round-up of all the 30 Days of Giving campaign, check out our Big Ideas post here.

Another charitable act that took place in December was SUNY’s announcement, in partnership with the SUNY Impact Foundation, to provide emergency aid to support degree completion for students in need. The launch of the student emergency aid pilot program will start at seven SUNY campuses – University at Albany, University at Buffalo, SUNY Buffalo State, Cayuga Community College, Dutchess Community College, SUNY Oneonta, and SUNY Orange –  and is supported by more than $600,000 in donations from the Gerstner Family Foundation and the Heckscher Foundation for Children.

Emergency aid will be given to help students facing an unforeseen event or an unexpected need for aid such as homelessness or threat of eviction, medical emergency, natural disaster, domestic violence, theft, and loss of employment.

Finally, we closed out the year with many SUNY schools named to Kiplinger’s 2018 edition of the Best College Values in America list.

From new applied learning opportunities for our students, to system-wide community service efforts, to making national news 2017 was a great year for SUNY. We can’t wait to see what we accomplish as a system in 2018 and we hope you join us for the year to come! 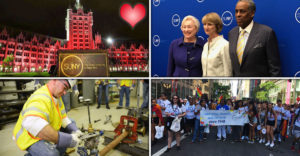 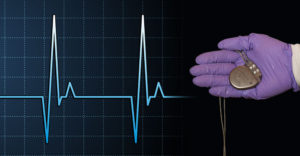 Shay Gauthier
December 30, 2022December 30, 2022
From Long Island to Plattsburgh, SUNY's 64 colleges and universities are wishing a happy holiday season and a joyous New...
Taryn Rackmyer
December 18, 2019December 19, 2019
It's the most wonderful time of the year at SUNY. We've all experienced some snow, cold temperatures, finals, and the...
Taras Kufel
May 24, 2019May 24, 2019
The school year has ended as has the college path of many students. Bachelor's, master's, associate's and doctoral degree holders...
Taras Kufel
December 18, 2018December 21, 2018
Snow, frost, lights, and hot chocolate... it's the season for friendship, cheer, good wishes, and community. The holiday season brings...
Sarah Petrak
January 2, 2018
Another year has come and gone, but before we get deep into 2018, we wanted to recap some of our...
Big Ideas
December 20, 2017January 12, 2018
As many students return home for a much deserved break, we want to take a quick moment to wish everyone...